Driveclub is the most boringest… ah, the… a… zzzzzzz…

This afternoon, I decided to pop in another game that dropped the same day as Alien: Isolation, as Alien isn’t exactly the kind of game you stream in the middle of the day. That game was Driveclub, which may be one of the most boringest of boring game experiences I have ever had. Good lord, it’s so freaking boring. I’m actually kind of mad at how boring it is.

I’ll be the first to admit that I’m not a car guy. I’m barely a driving game guy. I do like the occasional driving game, but my positive experiences tend to skew toward the Burnout variety – arcade racer types. I’ve played Gran Turismo, and I totally get what they were going for there. Hell, I respect it as a series. It’s just not for me. I do enjoy a good quick race, however, so after seeing some of the publicity for Driveclub around E3, I was actually pretty excited. A fast paced racing game with a social media dynamic, and dynamic weather too? Those are all buzzwords I like right now! I’ll totally pre-order!

Man, do I regret that pre-order.

Driveclub may be the safest, most boring implementation of the racing genre I’ve ever come across. You drive at a glacial pace, have the features are non-existent, and the graphic presentation is no better or worse than any other current next-gen title.

Some of my criticisms are somewhat unfair, in that the servers for Driveclub are consistently down due to… well, probably crappy management, but whatever. Without those servers, most of the social media aspects that would make this game stand out are not really all that available. They’ve turned off entire features. It’s a bad launch, and I can be critical of that, but not of the content, because I can’t access it. I’m also not usually one to criticize graphics at all, because I don’t care: if the gameplay is good, it could look like an Atari and I’d be happy. Lastly, not being a “realistic racing sim” guy, it’s probably my own fault for buying into the hype and not realizing what kind of game Driveclub really is: a watered down Gran Turismo wannabe.

See, I may not like Gran Turismo, but I respect it, for what it is and for fans of the genre. I even had some fun with it. I instantly disliked Driveclub.

When you start, you’re thrown right into the game. That’s fine, for some genres, but a racing sim? This thing isn’t telling some grand narrative, this is a trial-and-error racing game. Give us a few minutes to acclimate to your engine, please. So, after you fail your first course miserably, you get into the menu system, and that’s where things start going wrong. The UI designer was forced to make what is essentially a cross between Windows 8 and a Flash site from 2006. It’s somewhat confusing, has WAY too many levels, and half the thing is greyed out because of constant server connectivity issues. So, pretty much, all I can do is go back to the same race and play it endlessly until I get it pinpoint accurate (not to my driving style, but rather, theirs).

This feels like a game produced in 1999 with a modern graphics skin. Eventually, after three runs, I completed the first track in first place with all the bonuses. If I were a hardcore racing sim guy, I probably would’ve nailed it in one. But I’m not, so this casual racer did it in three. I couldn’t try any of the online races, so I moved on to race number two, in my new VW bug. While waiting for the game to load the track, having missed my afternoon nap (because I’m aging, sadly), I nodded off. 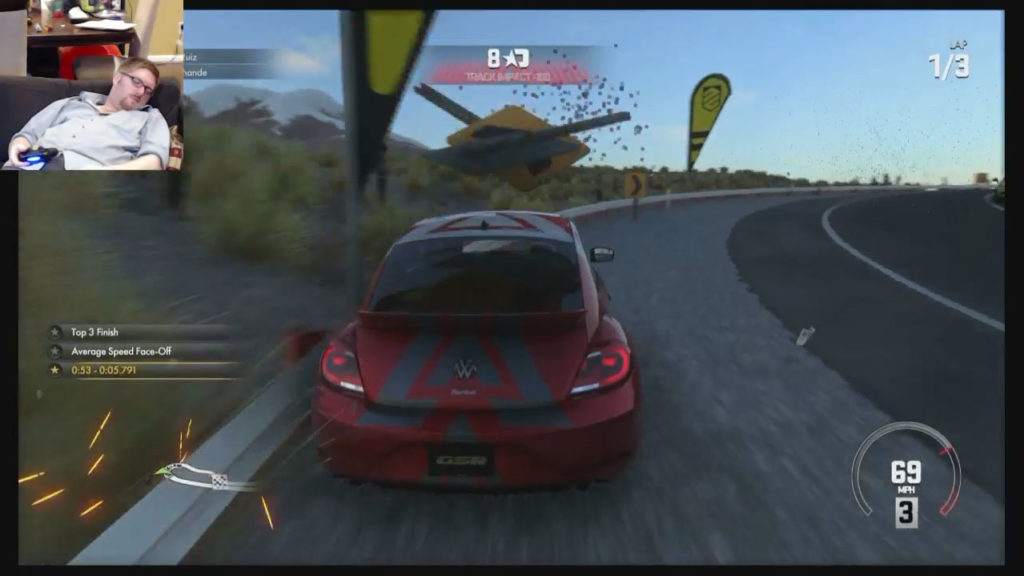 I came-to when I heard my car hit the railing. The other cars were about to make their first lap. I was WAY behind. So, I started trying to get back into the race. Being that far behind, I figured, screw it, I’ll come in 12th.

As I was crashing into the railing, a 3 second countdown ticked. It hit zero, and I was placed back on the track… directly behind the other racers. I finished 2nd.

So, even if you screw up, winning is totally an option, because this game is so boring and includes so little variety or any sort of spin on the genre I can literally SLEEP my way to the finish.

Lastly, I tried joining an actual club once the servers came back up. I got in there, looked at the list they provided. 40 clubs in total. I can search by name, but without any way to really know who is what or why, I looked at my 40 options. They were 40 clubs with a single member, all newly created. 40 individuals. Great.

I tried one more race, but the game locked up, the servers informed me they were down, then my entire PS4 crashed. So I said fuck it. This game is freaking awful.