The release of a new Nintendo console has always been a very special time for me. I got my first NES for Christmas in 1986, and it truly changed my life. Nintendo has had its ups and downs, and its most recent down was the release of the Wii U. Although I am firmly in the minority, I actually really loved the Wii U. It has some of my favorite games of this current generation. So, when it failed to find a sustainable market, I was devastated, but not surprised. Now, with the release of the Switch, their newest console, Nintendo is attempting to right the ship, with what is essentially a DS/Wii U hybrid with better technology. It released yesterday, and I got mine right after a very, very long day at work.

How Does it Fare?

I’ve spent the past day with the console, and so far? It fares pretty well. There are some very impressive features, some annoyances, and a LOT of room for growth. The thing I’m most excited about with the console is its hybrid nature, and that really is very cool. The actual size of the thing, once I had it in my hands, ended up being smaller than I expected. The unit itself is about the size of an Amazon Fire tablet, or a skinny iPad mini. The tiny little joycon controllers add to the width. Holding and playing with the thing as a portable device is surprisingly comfortable, especially for someone who would regularly get the claw hand from just about every portable ever released.

One of the coolest aspects of the device is its ability to transform into whatever you want it to be, which includes control. If you get tired of holding the unit, you can just detach the joycons and pull out its little kickstand. The thing I like about holding an individual joycon in each hand is that it feels way more comfortable than a solid controller, at least in my experience. However, if I get tired of the freedom of having my arms lazing about, I can simply attach them to the little joycon grip to have a more traditional controller layout. I have not received my pro controller or charging grips yet, as demand has been pretty high and Amazon has had problems shipping most Switch items. 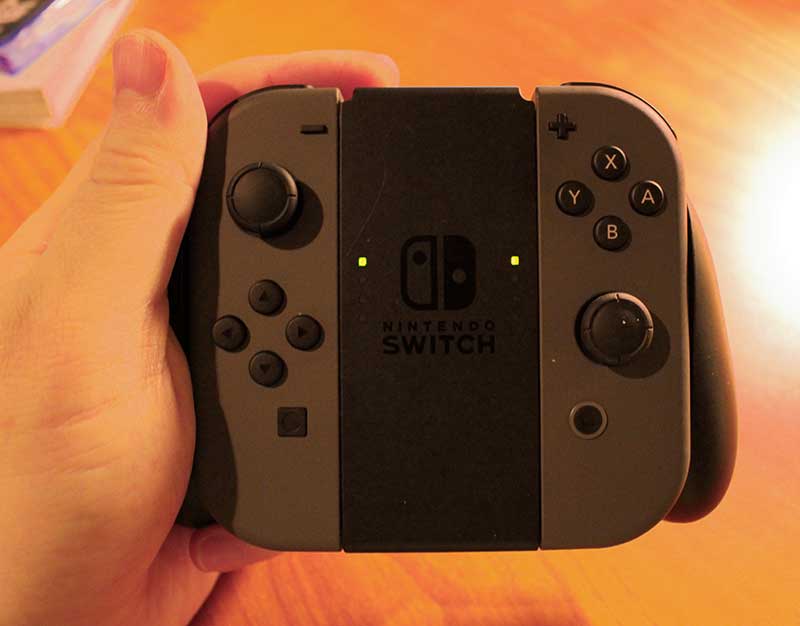 The joycons themselves are extremely small, and not fun at all to orient in the horizontal “traditional” controller position. However, it is nice that, if you want to play a 2 player game and you left your other controller at home, you can use them in a pinch. However, as motion controllers for a game like 1-2 Switch, they are extremely fun, versatile, and surprisingly responsive. 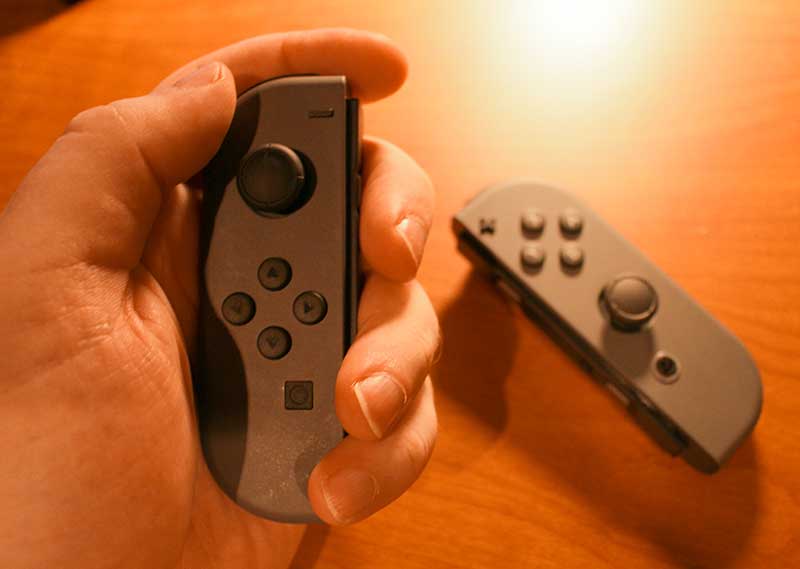 Fun for the Whole Family!

I know I just lost at least a couple of readers for that sub-head alone, but it really is true. After I opened and setup my unit, which took about 5 minutes, my family wanted to check it out with me. Okay, I forced my wife to play it with me, and my 4 year old, Amelia, DEMANDED she get a chance. Being 4, she’s not quite dexterous enough to really game yet, but she loves it anyway (Pac-Man and TMNT Arcade are her favorites, even though she can’t get past the first level – she loves it anyway). So, we threw in 1-2 Switch and had a go.

It was a blast. Although it is certainly not designed for the “hardcore gamer” (who is probably still complaining that Nintendo has the audacity to exist), it made for what is an extremely fun party game that even a 4 year old can play. There is a bevy of different games, all intended to be played with the two players facing each other rather than the TV. They’re almost entirely, “Who can do this faster?” style games, and yet, the controls manage to be unique enough that no two experiences will be the same. It also makes for a fantastic demo of the unit – so much so, I’m actually bothered that it wasn’t pre-packaged with the console. It really should be.

My favorite game was ping pong, which scratched that ping pong itch without having to have a full table in my house. Amelia liked the runway model simulator, in which she resoundingly dominated my pathetic attempt and swaying my hips to the beat.

One Base to Rule Them All

Another nifty feature, and one that everyone knows about at this point, is the base station aspect. It has one HDMI port, 3 USB ports (one in the back and two on the side), and a USB-C power port. That’s it. There’s also a little door on the back for wire hiding.

It really is as easy to use as all the marketing made it out to be. You just drop it into the dock that has been plugged into your TV and you’re gaming on the big screen. What makes this cool for someone with multiple TVs (such as myself), is that you can buy a standalone dock from the Nintendo store for $59.99. That way, you can move your console around without having to unplug and replug everything, or buying a second console for a new room altogether. 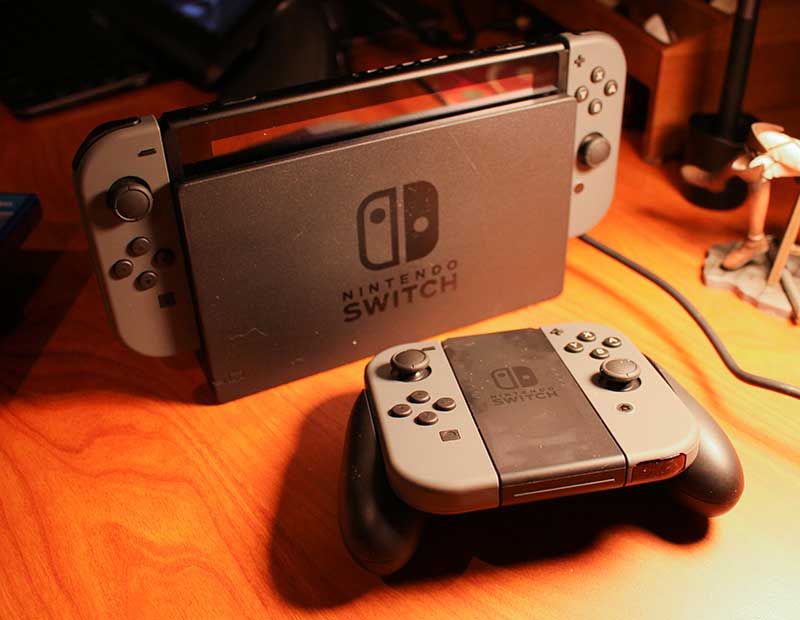 There is a caveat. There have been reports of Switch users scratching their screens when docking the unit, so it is strongly recommended that you purchase screen protection when picking one up (which should also be included in the box). That being said…

I’ve run into a few issues here and there in addition to the aforementioned scratching. First, the little edge nubbins you have to put on the joycons when detached can be somewhat sticky. I had to force one off and I was terrified it would break.

Don’t expect your console to be populated with awesomeness when you first boot it up. The launch library is sparse, even though the console launches with one of the best launch titles of all time; but other than Zelda, there’s a new Bomberman, 1-2 Switch, and a whole bunch of downloadable titles. Which leads us to the consoles biggest issue: storage.

The system comes with a 32gb Micro SD card, which gets filled up pretty quickly, even with the minuscule launch titles. Furthermore, you CANNOT TRANSFER SAVE FILES BETWEEN CARDS. That’s right. If you run out of space and want to upgrade to a new card, do NOT lose your old card, or play the games you were previously playing on anything but that card. Otherwise, you’re trapped. I’m really hoping they’ll rectify this when their online service comes along (I’m also hoping for cloud saving, which has been a godsend on the PS4 for me), but as it stands, this is a huge, glaring issue that Nintendo doesn’t seem all that concerned about. That makes me nervous.

However, the potential behind the console can’t be denied. If they would, in an update, provide a more tablet-like experienced. If Facebook, Twitter, Youtube, maybe an email app and a full-fledged web browser with the ability to switch to portrait mode were included with the device, it could -potentially- replace tablets for a number of users. I’d love to carry around my Switch, rather than a Switch and an iPad, or giant phone. But then, I’m all about consolidation, and I can understand that Nintendo, typically, only wants to focus on the gaming aspect. They also suck at the internet, so there’s that.

If Nintendo is able to woo back the biggest publishers, responds to criticism with firmware updates, and fixes its distribution supply chain, it could have a real gem on its hands. So far, I’m absolutely loving playing Zelda on the thing, 1-2 Switch is a surprisingly fun party game, and Bomberman is… well, I mean, it’s Bomberman. It’s exactly the same. So far as a recommendation goes, I don’t think it’s ready for the masses, not really. It’s a great purchase for hardcore Zelda fans, gaming and tech junkies, first adopters, and people with disposable income, but other than that, there’s really not enough to it for the general public to get too excited about. At the moment, it’s basically a portable Zelda machine with some mini-games. But then, so far as console launches go, it’s fairly standard. The problems seem to be average for a launch.

Overall, I haven’t been this excited for a new console in a long time. I picked up the PS4 and XBox One almost out of necessity, although I got a little caught up in the Microsoft hatred at the time (I still think their vision of the future was flawed, and it shows in the current interface). The Switch could be a… argh, I’m going to say it: gamechanger. They just need to keep the momentum. Personally, I’m rooting for a comeback.

Stay tuned for individual game reviews from the launch!