While lurking on Joystiq today, I noticed an article letting everyone know that the elusive, almost Japanese-only Playstation TV (originally PS Vita TV) had been released today. I’ve been extremely intrigued by the potential awesomeness that the PSTV could be, so I headed out after work to pick one up. Overall, it’s a somewhat hit AND miss endeavor.

The first thing I noticed upon unboxing the device is just how damned small it is: 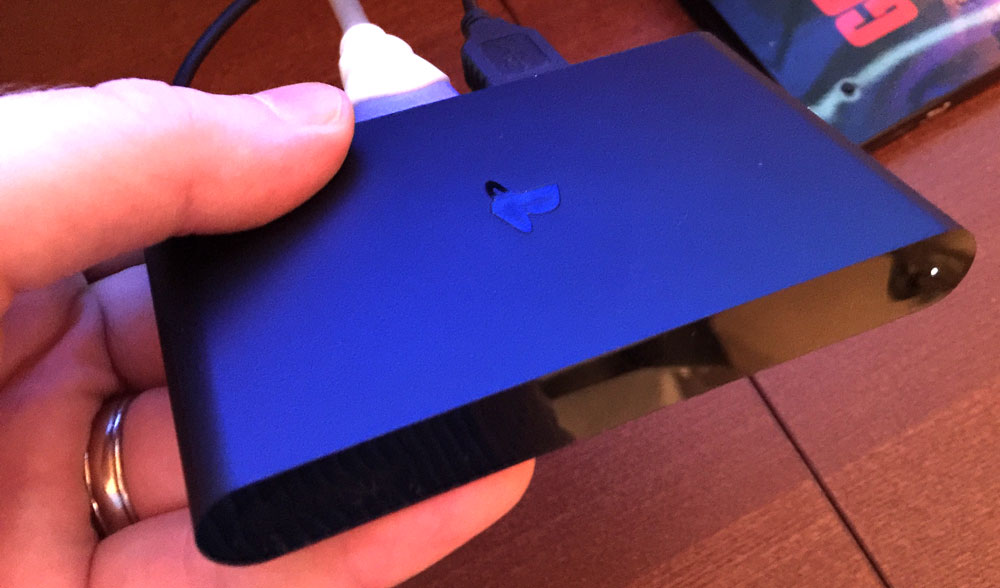 Roughly the size of a Roku and half as slim, it’s a tiny little thing. It leaves you a lot of options for placement around your TV. Given that the DualShock controllers are bluetooth, you could even use some velcro contact strips and mount it on the TV itself. It’s lightweight, and it doesn’t seem to heat up much at all – it’s certainly cooler than my Roku.

On the back you’ll find an HDMI port, an ethernet port, a USB port, a Vita card port, and power:

Setup was relatively easy. Date and time, sign in to the PS network, yada yada yada. Now, the PSTV is, basically, a Vita in a tiny box, so it uses the same cards your Vita uses. I yanked my main card from my Vita and threw it in the PSTV, and this is where the device succeeds: my Vita card was read perfectly without any sort of reformatting necessary. I can even pop it right back in the Vita and keep going. This is a fantastic way to be able to take your gaming on the go, but also be able to play those same portable games at home on a big TV.

Well, not all your games… but more on that in a bit.

The other place where the PSTV succeeds is its ability to stream from your PS3 via remote play. It may not be ideal to have to cut your system on every time you want to play some PS3 games, but it sure beats purchasing a new system for every TV in your house (should you have multiple TVs).

See, what I wanted out of the PSTV, when I originally heard about it, was a replacement for my Roku that also had the ability to stream Playstation games. This is where the PSTV misses. None of the streaming software available for the Vita works on the PSTV. Whether or not they will in the future, I don’t know. A replacement for your Roku, it is not. You can’t really stream much of anything outside what you purchase on the Playstation network, and who wants to buy their overpriced offerings when you can rent on Amazon or just wait for it to come to Netflix? This is a massive miss for the PSTV, and the one thing that will probably doom it to failure. It’s sort of like leaving a DVD player off the PS2 – there’s no way it would have been as popular as it was without that DVD player.

The other place where the PSTV misses is what it has to offer software-wise. Not all Vita games will play on the PSTV. Whether this is due to the lack of touchscreen capabilities on the DualShock controllers (the PS4 controller’s touch pad is not functional with the PSTV, which seems like a pretty big  oversight to me) or because Sony hasn’t worked out rights to play some of the games on the PSTV yet, I’m not sure, but it’s somewhat frustrating to know half my Vita games will not work on this device that is supposed to play Vita games. It’s a frustration that will drive away some consumers.

Now, these may seem like some pretty big caveats, but let me make one thing perfectly clear: I’m happy with my purchase. My gaming room is located in the basement, away from my entire family. It’s very secluded, which is great when you’re streaming or staying up too late. But sometimes I’d like to game around my family, or sit in bed and play on a sick day, and I don’t want to have to purchase a whole new system to do that, nor do I want to move systems around my house. The PSTV fills that gap for me perfectly. I can play a multitude of PS1 games, many PSP games, some Vita games, and I can utilize remote play. Basically, it’s a secondary system for another television in the house, and at $99, I don’t regret picking it up one bit. I know for a fact that I’ll be using the hell out of it. And given its size, the PSTV is extremely portable – you can basically bring it anywhere, and the ability to just swap out your Vita memory card back and forth makes it very tempting for Vita users.

That being said, I can’t recommend it for the average consumer. It’s a niche item. It definitely fits in with my gaming life and it delivers, for the most part, what I wanted, but not everyone lives in a two story home where they want to hook up video games to a secondary TV. I just can’t think of many people the device would work for. So, if you want to play a handful of Vita games and some other Sony offerings in another room in your house, by all means, go for it – it’s a great little piece of gear. If you’re looking for a Roku replacement or a cheaper version of the Vita, keep walking, this is not the tech you’re looking for.