The Trials and Tribulations of a Gaming Setup

This is what a tech-nerd-gamer’s home theater setup can look like when he/she is not happy with his/her current wiring setup. Hell.

I have a problem. Well, several problems, really, in my ongoing quest to streamline and simplify this whole videogame streaming thing. So, I thought I’d show you, the world, the kinds of trials and tribulations a gamer has to go through in order to achieve the impossible: hooking up multiple consoles with the best (or close to best) visual quality possible while making sure all said consoles are permanently ready to stream. Given the multiple generations of technology and hookups being used, this project has moved from “Wouldn’t this be cool,” to “!@#%.”

My current, non-working design schematic is as follows: 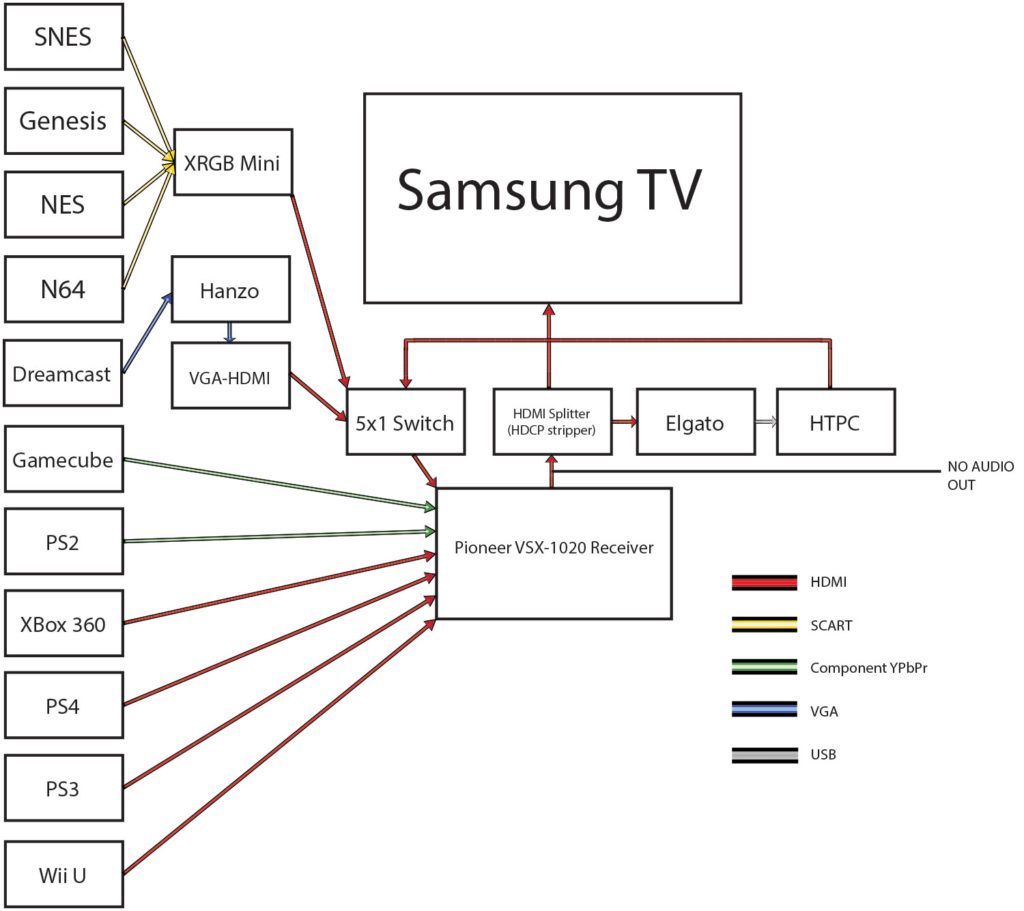 The problem with this setup is, as I have learned, there is no audio being sent over the HDMI monitor out on my Pioneer VSX-1020 receiver. You can set audio to pass-through, so you can use the TV speakers on the Samsung, but then what’s the point of having an awesome surround sound system? I may as well just throw out my speakers at that point. So, I set about trying to come up with different methodologies to trick the 1020 into sending two signals simultaneously. Unfortunately, the receiver is old enough that zoning tricks don’t work, and there is no master audio out (it can’t process analog into digital on the fly over more than one processor). I finally came to terms with the fact that this schematic would not work. I need to try something different.

One of the thoughts behind this rewiring project is to convert as many of the signals to HDMI as possible. I absolutely love being able to carry audio and video over a single cable, so that was one of the driving factors in my schematic redesigns.

I already have an HDMI switcher from Monoprice that has worked wonderfully over the years. Currently, I’m using it to control all of my retro systems going in to the 1020. Sure, I have to stand up and push a button to switch it (my Logitech Harmony remote won’t work with it), but hey, it’s like 5 feet away, I can make the effort. However, I have two consoles that are still using component out: the Gamecube and the PS2. These need to be converted to HDMI. Rather than simply buy a bunch of component to HDMI converters, I found this magnificent little piece of tech: 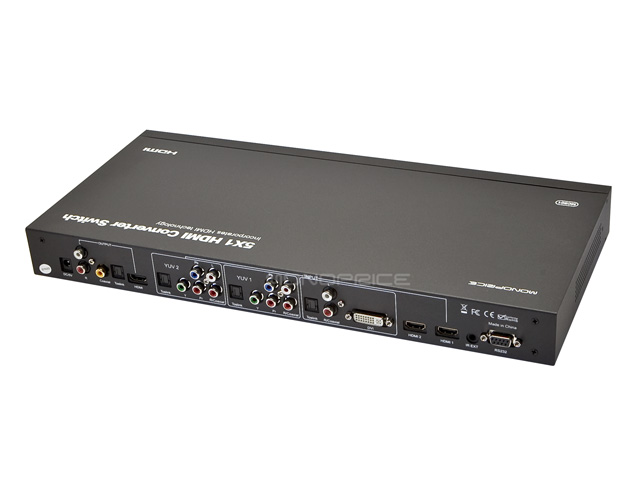 An HDMI 5×1 converter switch from good old Monoprice. So, I can hook up the PS2 and the Gamecube to it, along with two HDMI devices and a DVI device, and output that via HDMI. I’m thinking this would be my primary retro-gaming driver.

However, this particular setup requires that I use an additional HDMI switch, and there’s no guarantee that the different ports will work with the different HDMI versions (the Wii U seems particularly finicky). So, I came up with this:

This particular setup would require the purchase of an entirely new receiver – either the Pioneer VSX-1123 or the VSX-1124. Both models include a second HDMI out. With this particular setup I could, potentially, remove the need to use a secondary HDMI switch, which would be nice – less components are always better. The drawback is that I would need to buy an entirely new receiver, and there’s no guarantee it would work. So far as I can tell, HDZONE (the secondary HDMI out on the receiver) can send a simultaneous signal of the same content with audio – that’s all I need for the splitter and Elgato. In theory. I’ve yet to see proof that it would work. Either way, I would still need the Monoprice converter switch due to the lack of analog inputs on newer receivers.

I’m leaning toward schematic 2 simply because, if it doesn’t work, I can always return the receiver, but I want to make sure I’m not missing anything. Am I being obtuse? Missing something obvious? Anybody else have any ideas as to how they would set up a system in such a way as to be able to have everything hooked up without needing to swap crap out every time you want to stream, AND have decent sound so you can actually enjoy the game? Let me know what you think!